Rocketed from the dying planet Krypton, baby Kal-El was raised on Earth as Clark Kent and discovered that he had extraordinary powers far exceeding everyone around him. Combined with the strong moral values from his adoptive parents, he became Superman. Created by Joe Shuster and Jerry Siegel, Superman has become a worldwide icon and relevant cultural touchstone. This summer, the world’s first superhero will be bigger than ever in the highly anticipated blockbuster film Man of Steel, coming to theaters June 14th. Please enjoy this sampler of DC Comics’ standout Superman graphic novels, showcasing a few of the great stories featuring the characters in Zack Snyder and Christopher Nolan’s new movie epic. 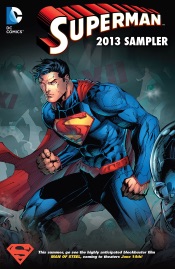